You may have heard settings of Psalm 47, the one that begins and reiterates the phrase O clap your hands. This is not one of those – the four words being the only part of Psalm 47 that appear. Instead, this O Clap Your Hands is a rollicking conversation between two Psalms and a 16th century English poem. And it actually requires you to clap your hands!

After a stately introduction that foreshadows the procession in the final section, the piece quickly gets down to business. The lilting piano and dancing chorus call to the cosmos of Psalm 148: Angels—clap your heavenly hands! Sun and moon—clap your interstellar hands! Sea dragons, storms, lightning, fruit trees, mountains—clap your metaphorical hands! Then the poem cascades like a waterfall. And when describing the pleasure in hearing the “Birdès sing,” they reply by singing the psalm in Latin!

Finally, the majestic parade of the human race turns the liturgical order of procession on its head by leading with kings and rulers in front as acolytes and placing the elderly and children in the position of highest honor. And since everyone mentioned in the text is invited to clap their hands, it seems fitting that the audience should clap along too!

I hope you enjoy this piece as much as I have enjoyed imagining all the singing…and clapping!

The score includes some valuable Performance Suggestions for utilizing its multi-choir structure, getting the most out of your singers’ clapping skills, and the optional audience participation in the final clapping pass.

Robb really took some liberties with Holy Writ, changing the order of some words, changing the gender of others, even making some stuff up. It is also a veritable Tower of Babel with his dangerous mixing of languages, potentially resulting in conductors and singers being smited by lightning as they sing. Could quite possibly be The Best Concert Finale EVER!

Choral Pyrotechnics Society
Burnt Porcupine, Maine
Yes, there is a town by that name.

O clap your hands you great sea dragons;
O clap your hands all oceans deep;
Stormy winds that do his bidding;
Snow and clouds, you lightning and hail,
Tall cedars and fruit trees,
Hills and mountains steep.

God’s purveyance for sustenance,
It is for man, it is for man,
Then we always to give him praise
And thank him than.
Laudate Dominum in excelsis!
Laudate eum de caelis.

Source Texts: Selection and concept by
Mark Ingegretsen, adapted by Peter Robb
Psalm 47:1a; Psalm 148:2 – 5a; 7-12
Pleasure It Is Attributed to William Cornish 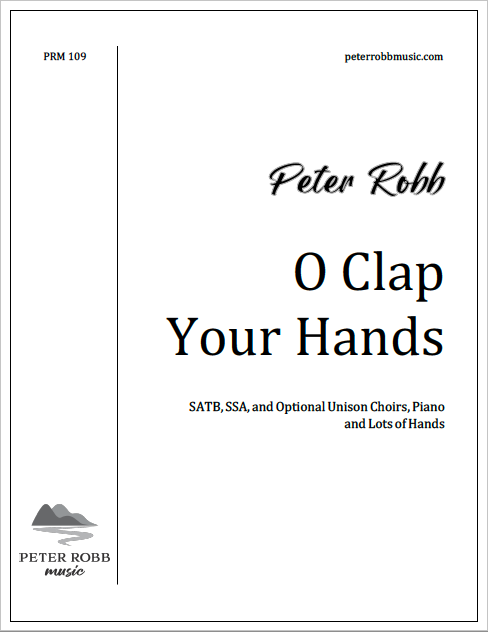