The ancient text of the Roman Mass has been set by composers for over 1100 years since the first chant settings of the Kyrie. Missa Brevis is a short form of the Mass, generally omitting at least the long Credo text, and has been a popular choral genre for composers of the 20th and 21st centuries.

Ever since hearing Gabriel Fauré’s Messe Basse for the first time in 1982 when I began working with the Phoenix Boys Choir, I had wanted to compose a setting for this lovely text. For that reason, the work is dedicated to Harvey K. Smith, conductor of the Phoenix Boys Choir from 1960 –1999, and mentor to me in my early years of choral conducting. The dedication also includes Harold Best, my first composition instructor, whose guidance still resonates 40 years later.

Although each of the movements may stand alone and be excerpted for liturgical or concert use, the best experience of the work is when performed in its entirety. An organ edition, created for performance in Canterbury Cathedral, and a string orchestra edition with enhanced piano created for performance at Carnegie Hall both work with this piano/vocal score and are available from the composer.

Missa Brevis No. 1 is a satisfying musical experience for younger treble choirs up through advanced women’s choirs and includes Soprano divisi in many places. For younger treble ensembles in which the Soprano divisi is not practical, the Soprano II notes may be omitted as needed without sacrificing the intent of creating a melodically rich, lean textured setting of the traditional texts.

The “Kyrie” text versification is beautifully done, with the “Christe eleison” being particularly effective. The reverent setting of the “Sanctus” uses surprising, ringing harmonies; the key change of F Major to D Major is especially beautiful. The “Benedictus” is more expressive, using divisi in the simple harmonies. The “Agnus Dei,” in G Major, is quite graceful, ending with elegant counterpoint composed in three parts.

Sung in Latin   (Translation in italics)

Benedictus
Benedictus qui venit      Blessed is the one who comes
In nomine Domini          in the name of the Lord.
Hosanna in excelsis.     Hosanna in the highest. 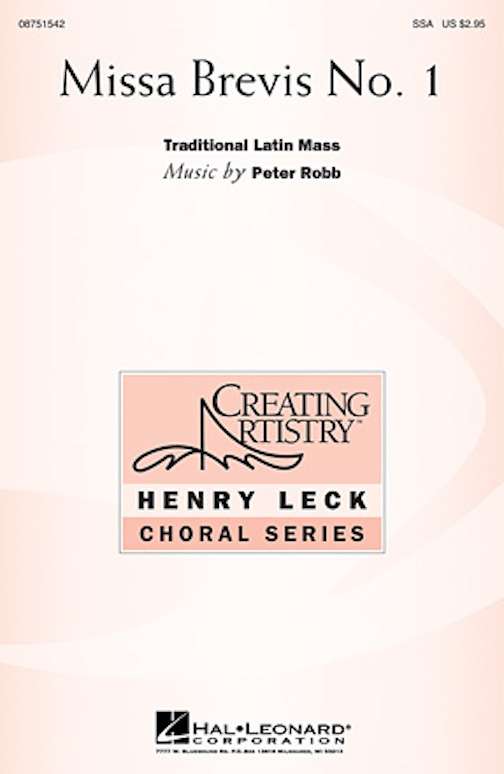