I Dream A World

In the summer of 2008, Pacific Int’l Choral Festivals coincided with the U.S. Track and Field Olympic Trials, which took place directly across the street from the festival headquarters in Eugene, Oregon. In commemoration of the U.S. Trials and the Olympic Games that followed in Beijing (One World, One Dream), Langston Hughes’ poem “I Dream A World” inspired the theme for picfest 2008 and this choral setting of his beloved words.

Mr. Hughes, an African-American poet closely associated with the Harlem Renaissance of the early 20th century, dares to imagine a world that Dr. Martin Luther King, Jr. echoes many years later in his famous oration I Have A Dream.  Like the image of the ancient Olympics in which a runner is depicted passing a baton, the Olympic ideals and the prophetic words of Mr. Hughes and Dr. King are as profound as they are simple. By setting these words to music, I invite singers of all ages, “whatever race you be,” to pass the baton to the next generation and proclaim this dream again.

The music arrives at a gospel-styled vamp with the words “whatever race you be, ‘til everyone is free” at m. 71, but the preceding and following sections embrace a broader, eclectic style. The percussion parts (available from the publisher) reinforce this multi-ethnic intention of the poem and the musical setting.

Langston Hughes’ famous poem provides the text for soaring melodic lines and a big beat refrain. A poignant addition to MLK Day, Black History, Social Justice, and Peace themed concerts. This rousing finale to any program is an excellent selection for treble choirs in high school and up, or advanced children’s choirs.

I dream a world where man
No other man will scorn,
Where love will bless the earth
And peace its paths adorn
I dream a world where all
Will know sweet freedom’s way,
Where greed no longer saps the soul
Nor avarice blights our day.
A world I dream where black or white,
Whatever race you be,
Will share the bounties of the earth
And every man is free,
Where wretchedness will hang its head
And joy, like a pearl,
Attends the needs of all mankind-
Of such I dream, my world! 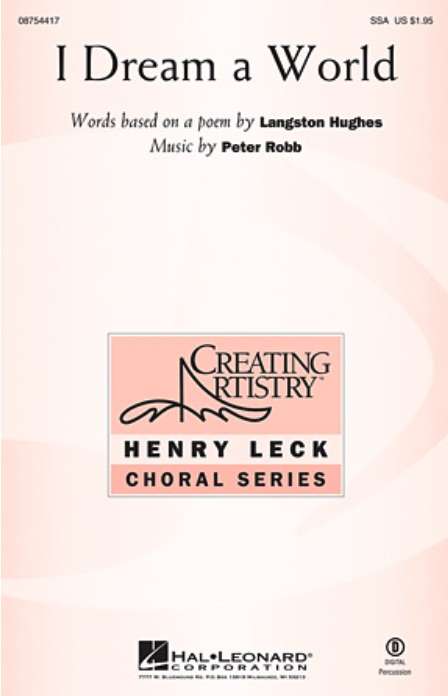